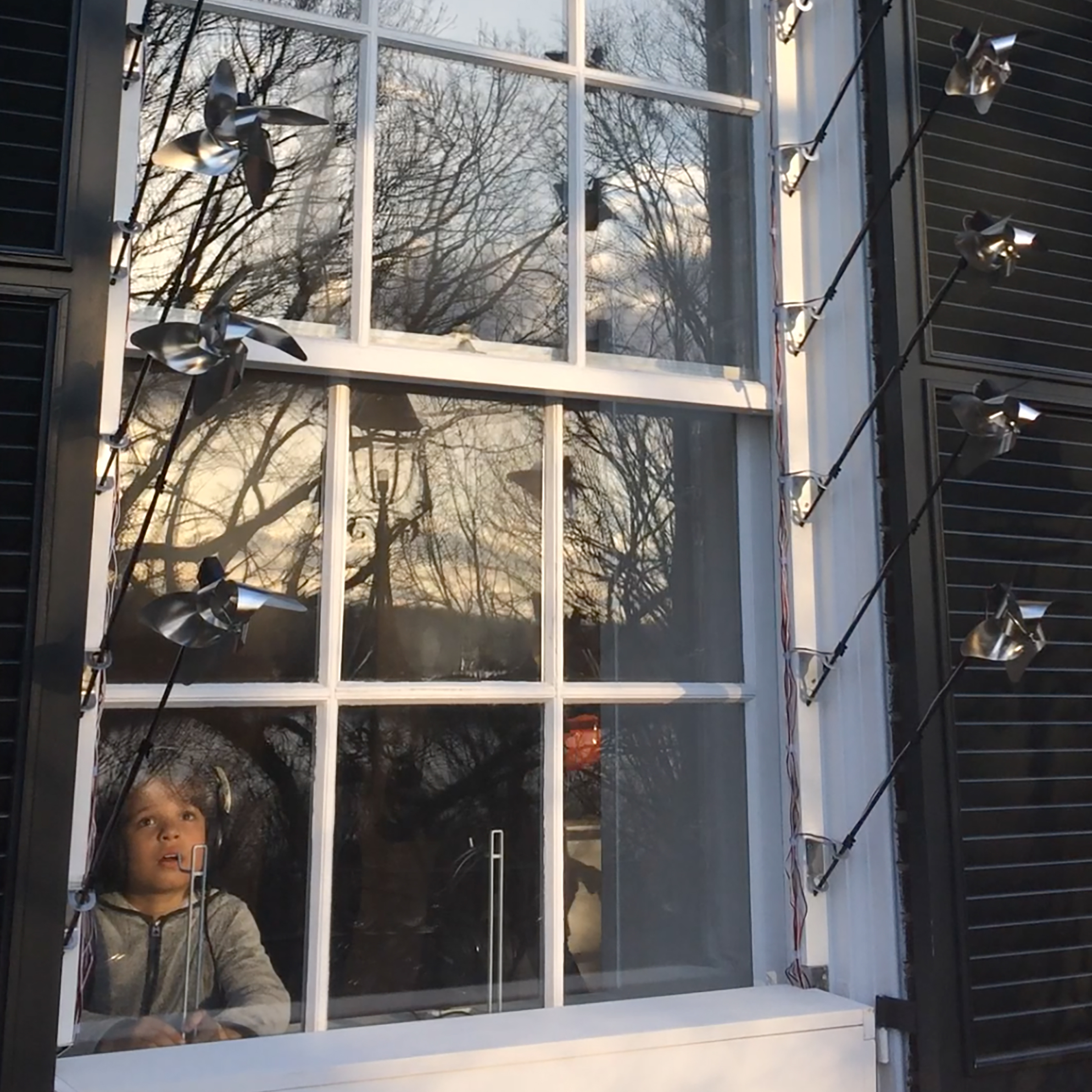 Wind on the Wing

Installed on the outside of Wave Hill’s Glyndor Gallery window, 12 wind-driven pinwheels influence sound recordings of commonly heard, local Bronx birds and associated tones. The speed of each wind-turned pinwheel affects the variations in the projection and audio, which are seen and heard inside the gallery.

Inspired by Charles Baudelaire’s statement “I have felt the wind on the wing of madness,” this installation examines our increased loss of connection to the natural world and the potential physiological impact of that loss.

This project is part of a series of works intended to connect viewers with the natural environment in unexpected ways. Wind on the Wing explores how we respond to sounds, particularly the interaction of natural and synthetic sound. The wind, an ethereal and unpredictable expression of nature, acts as conductor.

Binaural beats of varying frequencies are paired with each bird song. These pure tones with slightly different frequencies create an auditory illusion when played through headphones. The brain generates a third frequency, and the listener experiences a warble or tremolo as the brain tries to reconcile the pitches entering the left and right ears. Visitors may find that their response to the sounds change when the wind blows. Depending on the wind speed, the resulting bird symphony may at times be soothing and calm or slightly maddening.

The following frequencies were selected from the bird song using a spectrum frequency analysis. The binaural beats were created by pairing the sampled frequency with an additional tone decreased by 10hz.

Projected images on a wall inside the gallery display close-ups of the two loudest birds heard in the audio at a given time. In contrast to the capriciousness of the wind-driven audio, these images slowly fade into one another, creating a calming visual counterpoint to the audio.

Each pinwheel drives a different bird song and associated tone. An IR sensor is attached to each of the 12 pinwheels, which counts the number of times the pinwheel turns. When the pinwheels are still, an automated modulation gradually changes the sounds and images. When a pinwheel turns, the associated audio (bird song and tone) is orchestrated in real-time by the wind: the bird song decreases in volume, and the tone increases.

Special thanks to Brett Peterson for physical computing assistance.