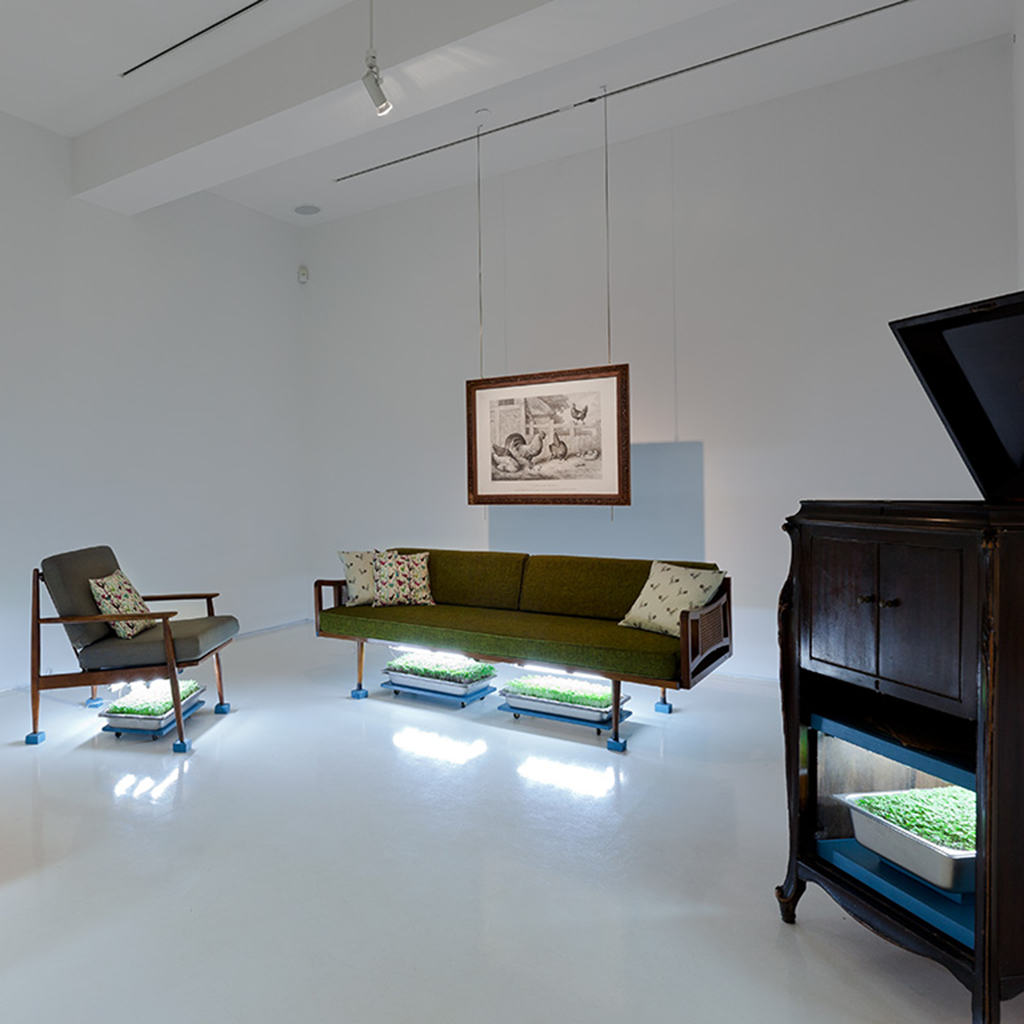 A participatory project exploring the value placed on food and artistic social practice through interactions with gallery visitors.

8 Extraordinary Greens was a participatory exhibition at Mixed Greens Gallery, May 3–June 2, 2012. With a series of “domestic microfarms” and a “farmstand”, the exhibition explored the value placed on food and artistic social practice through interactions with gallery visitors.

Jenna started experimenting with apartment-sized farming by converting her bookshelf into a mini greenhouse. She designed an efficient, sub-irrigated system for growing energy-packed edible plants in small, urban spaces.

To suggest a feeling of domesticity similar to her first experiment, household objects were modified to house the microfarms. For example: a dresser, a suitcase, a chair, a kitchen cabinet, a desk, etc. were adapted with a planter and lights.

As an urban agricultural design project, she envisioned a way to grow food in an anthropogenic landscape for all strata of citizens, but as an art project, she hoped to facilitate conversations about what we value: convenience vs creative effort, regenerables vs disposables, neighbors vs strangers.

The installation was also staged with references to Aesop’s fable “The Cock and the Jewel,” a riddle about relative value. In the story, a cockerel searching for food finds a precious gem, but rejects it, wishing for food instead.

A small “farmstand” served as a space for the harvest and sale of eight kinds of microgreens. The gallery visitors determined the monetary value of the exchange, based on a set of choices that support local, urban agriculture non-profits, like Added Value, Just Food, Bushwick City Farms, and Bed Stuy Campaign Against Hunger. They then chose to take the greens or leave them to be donated to CHIPs Soup Kitchen.

** Nearly $1000 was collected and donated to local non-profits and pounds of microgreens were served to CHIPS soup kitchen visitors. **

These transactions were recorded in the form of a “receipt”- a print signed by both the consumer and artist. The consumer took the receipt and a duplicate was hung in the gallery to record the collective value of the exchanges over the course of the exhibition.

“Are These the Tiniest Microfarms of Them All? New York City Artist Grows Food Inside Furniture” TreeHugger, Jennifer Hattam, March 17, 2012